Within the category of vaginitis, the most common documented etiologies are bacterial vaginosis (BV) which represents about 40% to 45% of diagnosed infections; vulvovaginal candidiasis (VVC) another 20% to 25%; trichomoniasis about 15% to 20%; and then a smaller proportion will be mixed diagnoses (1).

BV, as the most common vaginal condition affecting women of reproductive age, has a prevalence estimate between 10% to 30% among heterosexual women in developed nations and 20% to 50% in higher risk groups, such as women who have sex with women, African, or African-American women. The symptoms of BV include an abnormal vaginal odor and increased discharge, but half of women with BV are asymptomatic. Recurrence after treatment for BV is common, close to 50% of treated women will have a recurrence within 6 months (2).

Adverse sequelae associated with BV include miscarriage, preterm delivery, and increased risk of sexually transmitted infections and HIV, among others; with high economic burden to the health care system, as shown in Tables 1 and 2. 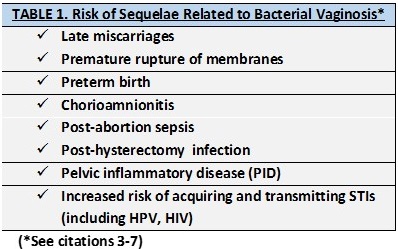 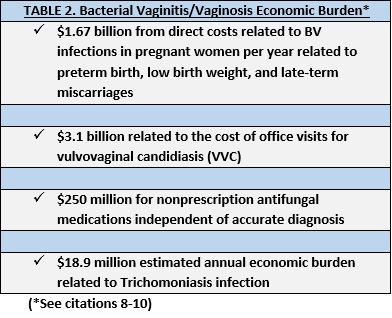 BV is More Than Just a Medical Burden for Affected Women

Beyond medical sequelae and increased economic cost, in 2013, Bilardi and colleagues (11) presented data evaluating the physical, emotional, sexual, and social impact of recurrent BV, followed in 2016 by an extension describing deficiencies in the clinical care of women treated for BV (12).

In the 2013 study (11), thirty-five women with male and/or female partners participated in semi-structured interviews face-to-face or by telephone about their personal experiences with recurrent BV. Women reported that the degree to which recurrent BV impacted them physically, emotionally, sexually, and socially often depended on the frequency of episodes and severity of symptoms. Symptoms of BV made them feel embarrassed, ashamed, ‘dirty’ and concerned others may detect their malodor and abnormal discharge. There was substantial impact on self-esteem and sex lives, with women regularly avoiding sexual activity. Many felt that their life was being restricted, resulting in emotional distress.

Bilardi and colleagues (11) concluded that when managing recurrent BV, it is important to recognize not only the physical symptoms or discomfort, but also the significant psychosocial sequelae experienced by women. They cautioned while BV is often considered a minor and common vaginal condition by clinicians, its recurrent nature has substantial impact on women’s emotional, sexual, and social lives.

In the 2016 follow-up, Bilardi and colleagues evaluated women’s experiences with clinical care for BV (12). The majority reported frustration and dissatisfaction with current treatment regimens and low levels of satisfaction with the clinical management of BV. They disliked taking antibiotics regularly, experienced adverse side effects from treatment, and felt frustrated at having symptoms recur quickly after treatment. Issues in clinical care included inconsistency in advice, misdiagnosis, inappropriate diagnostic approaches, and the insensitive or dismissive attitudes of their primary caregivers.

Thus, as mentioned, vaginitis/vaginosis is an extraordinarily common issue for practitioners who care for women’s health issues and vaginitis is the most common gynecologic condition for which women seek care; it is a medical issue with high personal patient burden as well as a high economic burden in terms of correct diagnosis and effective treatment (1).

An appropriate and careful history is a critical component of a full evaluation of a woman presenting with vaginal symptoms, to be done in concert with a thorough examination and appropriate laboratory testing. It is important to explore sexual behaviors and practices, gender of sex partners, menstrual history, vaginal hygiene practices, and among vaginal hygiene practices vaginal douching since douching has been shown to increase a woman’s risk of some vaginal infections, particularly BV and Trichomonas. An examination of the vulva, the vagina, and evaluating the cervix are undertaken.

Traditionally, microscopy has been used as a primary form of evaluating a patient presenting with symptoms suggestive of vaginitis; microscopy allows for evaluation for trichomonads, yeast forms for candidiasis, or clue cells which are the typically associated with BV. However, many clinical settings no longer have microscopy available, thus microbiologic testing is now a primary method role of evaluating women presenting with vaginal symptomatology. The CDC indicates that in settings where microscopy and pH paper are not available, or where clinical personnel are not trained in their use, nucleic acid testing using newer molecular technologies is an appropriate first-line method to evaluate women with vaginal symptoms when used for the diagnosis of BV and trichomoniasis, as will be addressed later in the ECHO article.

Referring to findings from Bilardi and colleagues (11, 12), they highlight that the considerable uncertainty about the causal etiology of BV, its high rates of recurrence, unacceptable treatment options and often insensitive and inconsistent if not incorrect clinical management, are substantial barriers to effective care for affected women. They further offer that clinical management of BV could be improved through the use of standardized diagnostic approaches, increased sensitivity and understanding of the impact of BV by clinicians, and provision of evidence-based advice about known BV-related risk factors.

The focus by Bilardi and colleagues on diagnosis of BV is well placed. In 2014 Powell and Nyirjesy (10) reiterated that accurate diagnosing of BV is critical, as too often recurrent vulvovaginal symptoms are managed empirically, often leading to delay of appropriate therapy and placing an increasing burden of disease on women affected. Further, they state that use of Amsel’s criteria and/or Nugent score of vaginal fluid Gram stain are not widely and/or correctly used in diagnosing BV, leading to incorrect diagnosis. In fact, Schwiertz and colleagues (13) demonstrated misjudgment/misdiagnosis of BV in 61% of cases in a study of 53 general practitioners and 31 gynecologists.

One approach to improving diagnostic sensitivity for BV may be increasing the clinical use of newly emergent molecular diagnostic platforms, such as those that utilize highly sensitive and specific real-time PCR. Molecular PCR testing offers the opportunity for great strides in testing accuracy, in addition to earlier and more precise elaboration of the offending pathogen or pathogens. Rapid and correct diagnosis of BV and the offending organism or organisms could lead to more effective management of BV, lower rates of recurrence, and improvement in the physical, emotional, sexual, and social distress women experience when affected by BV.

Newer PCR testing has a number of capabilities, including 1) a unique analysis algorithm that distinguishes the normal compared with abnormal vaginal microbiome as the likely source of disease; and 2) identification of different species of Candida organisms requiring different approaches to treatment.

The vaginitis/vaginosis targets for identification are increasingly expanding, and include targets such as:

Utilizing the newer PCR molecular diagnostic tests may well allow for improved accuracy of pathogen detection and lead to the more consistent and effective treatment of BV, if not to other vulvovaginal infections.

In closing, the newer molecular-based tests, including those for BV, are now becoming more clinically available to practitioners in their offices, and hopefully will allow them to have greater access to precise diagnosis of BV for women who present with symptoms. In addition, these assays, while adding significantly to the availability of precise diagnosis for symptomatic women in office settings, also expand the availability of precise diagnosis to women who present on an emergent basis in the hospital setting, thus providing a similar opportunity for an optimized outcome for women who may have symptomatic vaginitis/vaginosis. 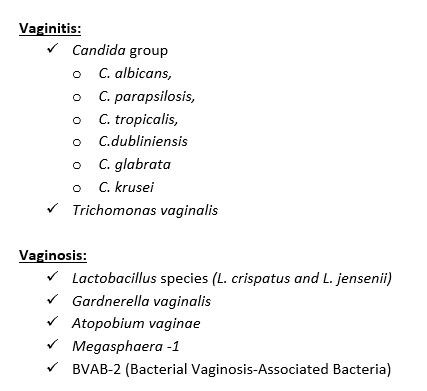 Continue to Post-Test
72
Leaving so soon? Let us know why.
72
ECHO™ A CME Self-Study Activity: Bacterial Vaginosis: The Impact of Incorrect Diagnosis

If you’ve already completed the activity.

Stay current with the best on medical education

Register for free
You are now leaving Global Women's Health Academy and going to a site run by another organization.

Press cancel to remain on Global Women's Health Academy. Press the link below or the continue button to keep going.